We didn't have to travel far for this one... just out to my backyard!

Like many gigs in this Year of the Plague, our concert out at the historic Appomattox Court House, scheduled for Thursday, August 27, was cancelled. However, the organizer asked if we'd be willing to do a virtual concert instead, and so we agreed to pre-record a concert and then air it as a Facebook Watch Party on the scheduled date and time. 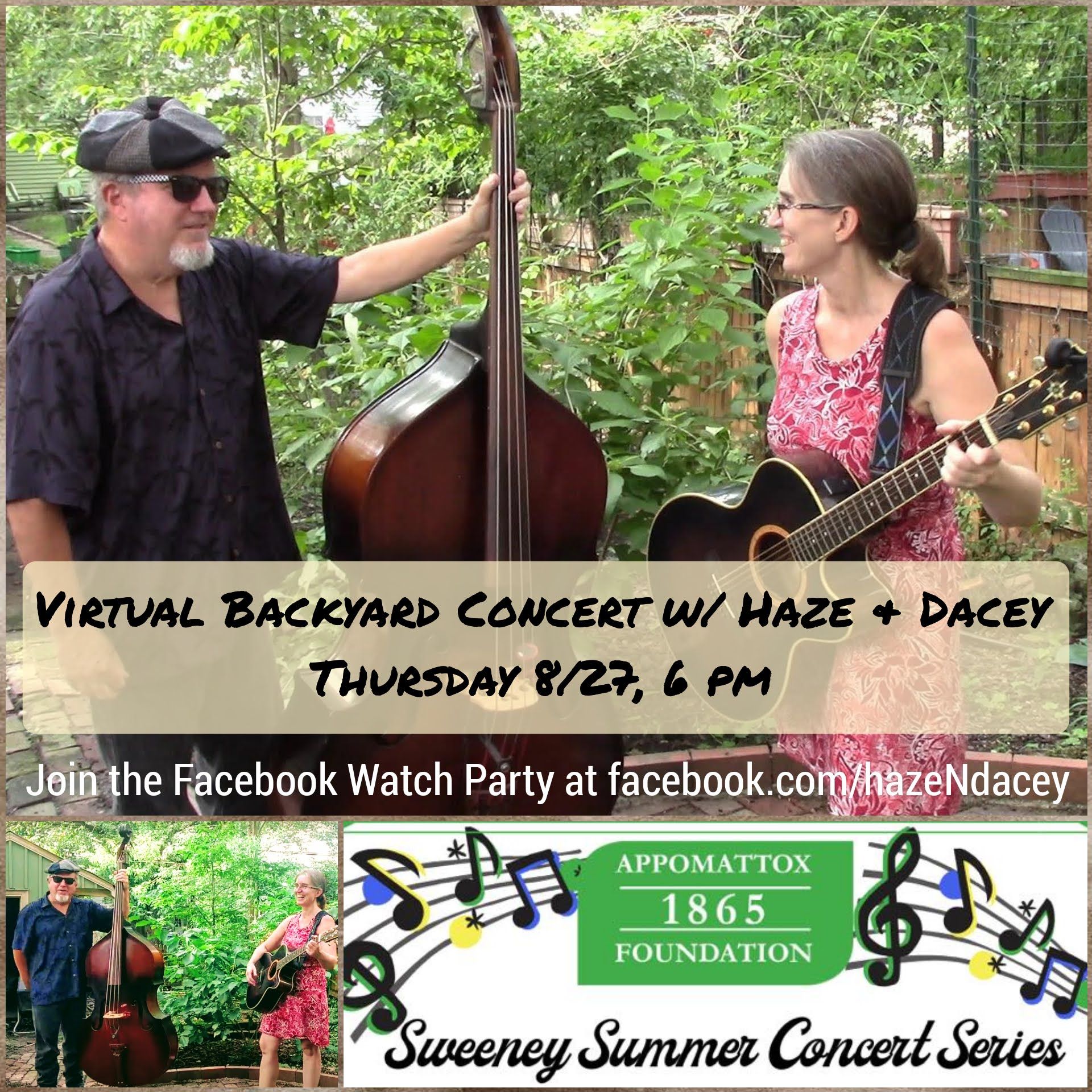 Now, if you know me personally, you know I'm a master procrastinator, and so it's no surprise that we didn't get around to recording the concert until the Sunday before. And it was not as straightforward as I'd hoped. My trusty condenser microphone was suddenly no longer working. I'm not sure if the mic itself is broken, or if my recording board is no longer sending the phantom power it needs. Regardless, it didn't work. It picked up very faint music and very loud hiss, and that's it.

I wanted a truly unplugged performance, no mics up in our faces. I didn't really have the right equipment, but we made do with my new video camera, supplemented by our vocal mics that were set up near the camera, and feeding into my multi-track recorder. I had the condenser plugged in also, just in case it might miraculously start working again, but as I expected, it was useless. We also had John's phone set up to record from a different angle. But as it turns out, that only records for about a half hour, then stops. Also, the audio sucks. 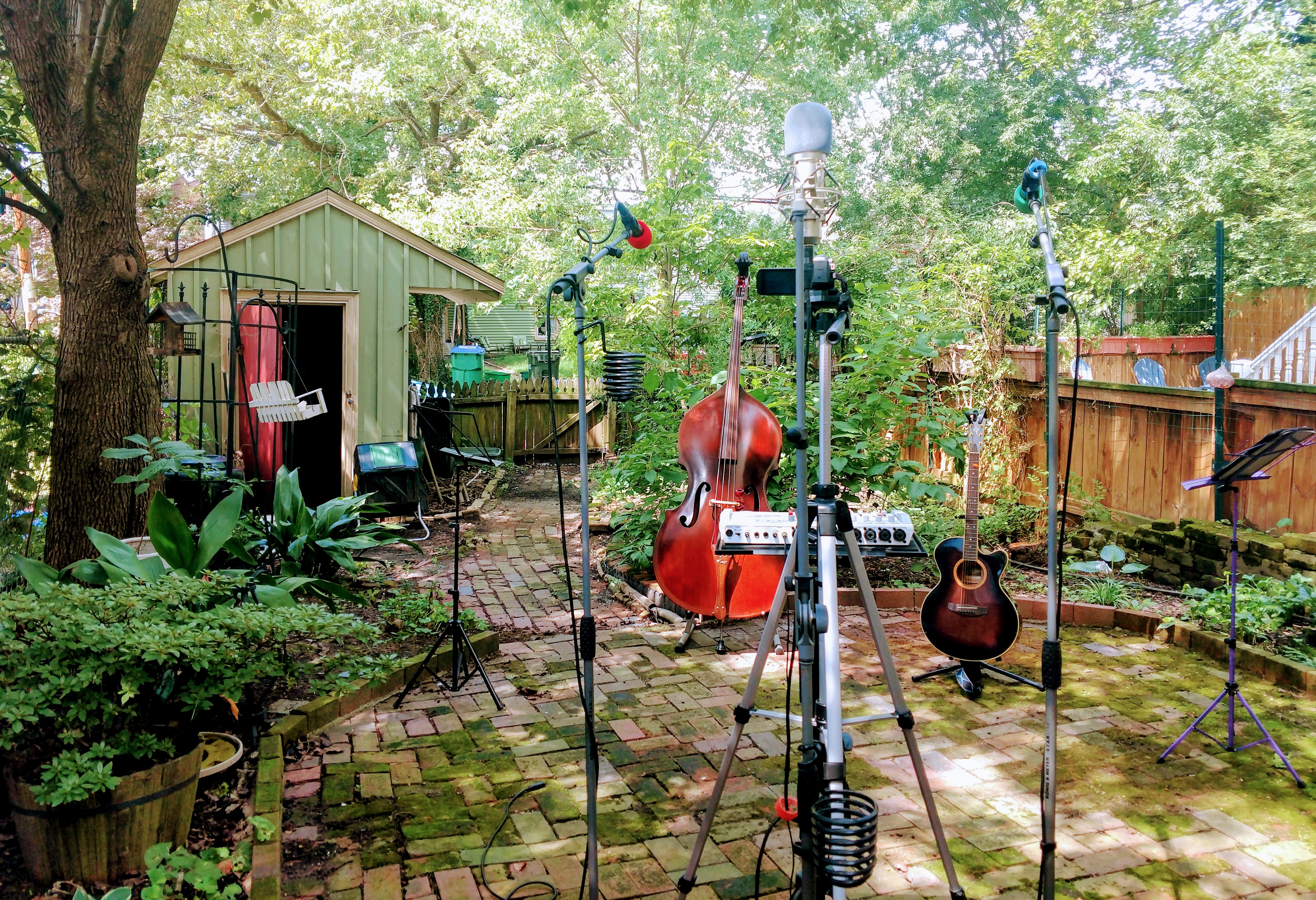 So we did the recording, 16 songs total, and had a fun time doing it, although it was getting rather hot and sticky toward the end. Then the real work began, for me. The video editing software I'm using is pretty new to me, so there was (and still is) a bit of a learning curve. I knew this was going to take hours (and hours and hours) of my time, so I actually took a day of leave from my real job to get it done.

First, I had to sync up the microphone tracks with the video. I had clanged a spade on a metal bucket at the beginning of the recording, to have an audio spike I could line up. But I didn't realize that my camera would split the concert up into three files, so that complicated things, especially where it split in the middle of a song. Luckily, I was able to use the tambourine hits to line up the later stuff. I did as well as I could. It isn't perfect.

After that, I had to edit out all the bloopers and false starts and tuning episodes -- lots of tuning between songs because my guitar is being cranky. At one point I realized I didn't have the tambourine I needed, and had to run out to the van to get it, leaving John doing a soliloquy for several minutes on film, just to be funny. So yeah, I had to cut that out, too. And then I had to do all the fade-ins/fade-outs between songs, and put in the text at the beginning and end. Not gonna lie, I worked my ass off to put this thing together. But it was a really good learning experience. 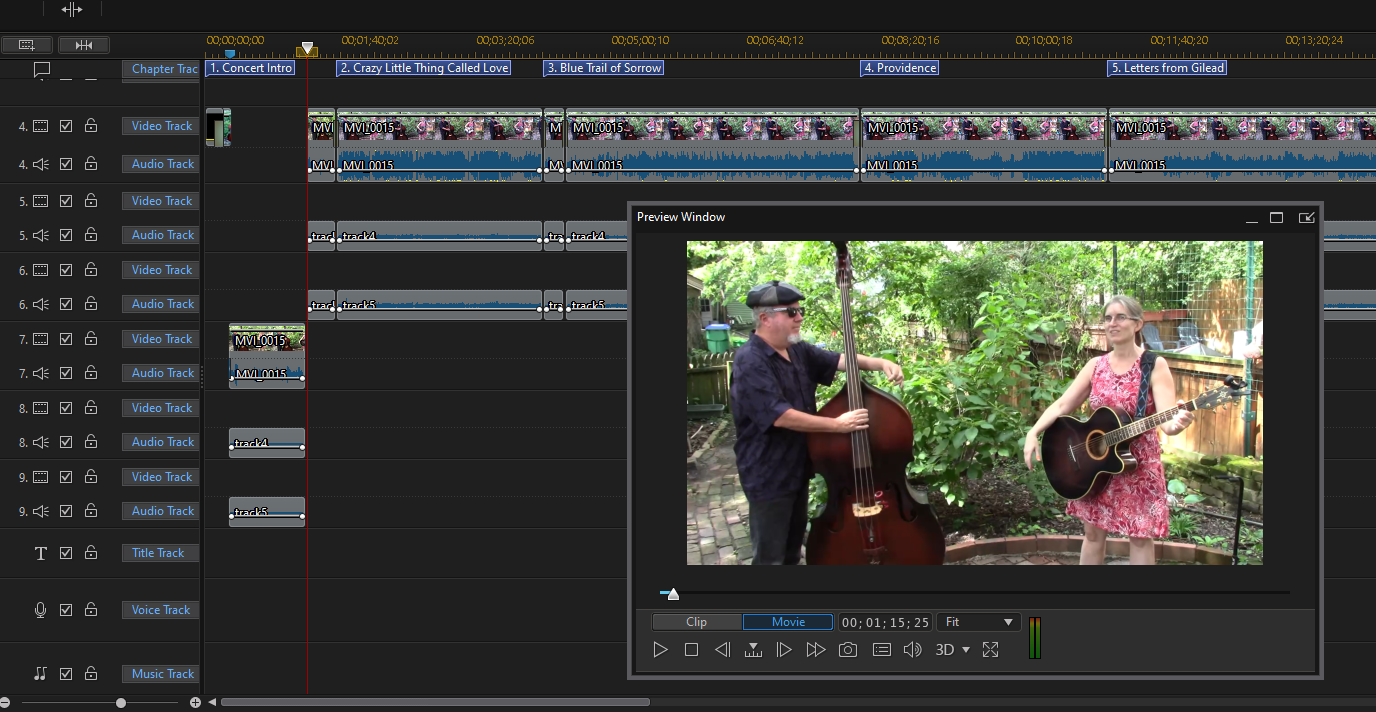 Obviously there's a lot of ambient noise in the video, but that's the nature of outdoor recording when you don't sing directly into the microphones or plug in the instruments. There are some Matrix-like glitches in the video, but that's a software or hardware issue I couldn't fix. All that aside, I think it turned out pretty well considering this was the first time I'd ever tried to do a long video like this.

When I uploaded the video to Facebook, the processing on their end resulted in some serious audio/video sync issues especially in the latter part. It is definitely not like that in the file on my hard drive. Today, I re-uploaded the file. That greatly improved the situation, based on what I saw initially, so I deleted the video I had originally posted. But now I'm watching it again, hours later, I see that they have done some additional post-processing (apparently to produce the high-definition rendering), that screwed up the sync again. So now, I've lost the view statistics, but the sync issue is just as bad as it was before. Honestly, I'd rather have low-definition video with good sync, than high-definition with poor sync.

If you're reading this, please do me a favor and report the audio/video sync issue on the video below to Facebook. Maybe if enough people do that, they'll fix it. All you have to do is start playing the video, then click on the little gear icon in the bottom right of the video frame. You should then see the option to "Report Video Issue", and then select "Video and audio are out of sync." Don't forget to hit the "Submit" button! Thank you.

Here's the concert video in its entirety. I'm also in the process of splitting it up into individual song videos. As of this writing, I'm about half way through that process.

Because I'm a big dork, I also made a bingo game to go with the concert. The image below is clickable, so you can actually play online! 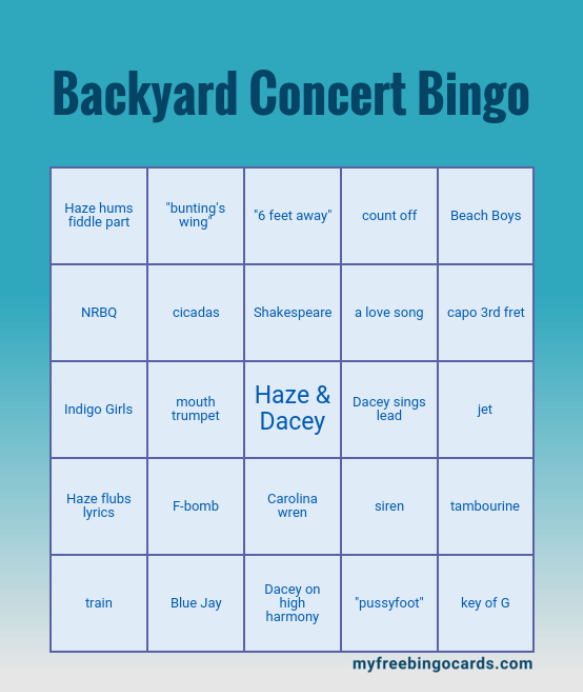