Last Friday afternoon (March 26), we hit the road again for our first gig of the year. We love driving out on those scenic country roads. Every time we do, if it's been awhile, I have the urge to sing that old Willie Nelson song, but I don't know much of it so I pretty much just bellow, "On the road again, just can't wait to get on the road again..." and then resolve to finally sit down and learn the song one of these days. Which never seems to happen. 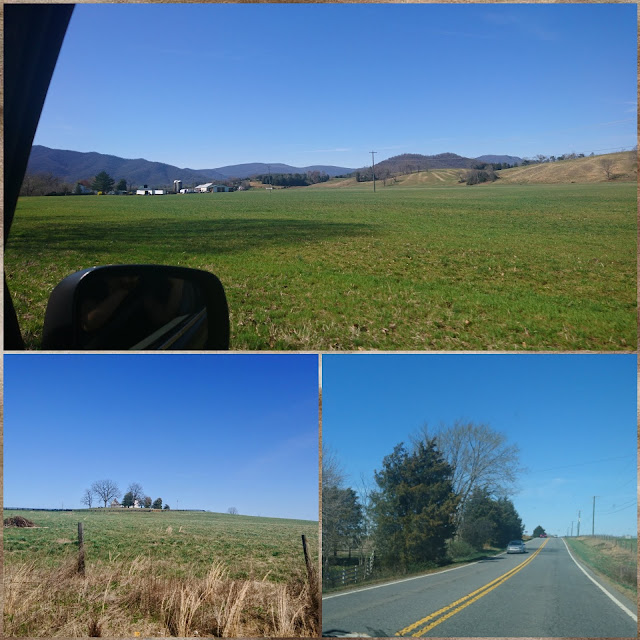 We decided to make a weekend of it, and rented a cabin at Graves Mountain. It had a nice porch with rocking chairs, perfect for relaxing and taking in the view below. Plus they provided seemingly limitless firewood. 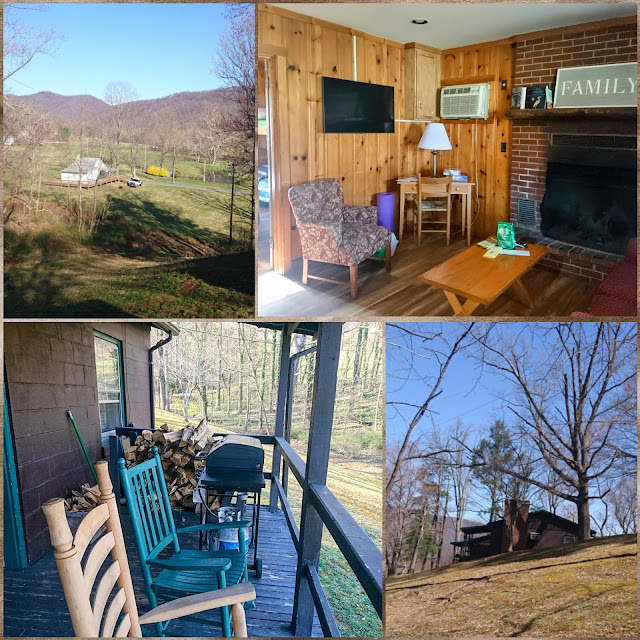 We got there about 4 to check in, but only had a few minutes to look around before heading down the road to set up at DuCard Vineyards. 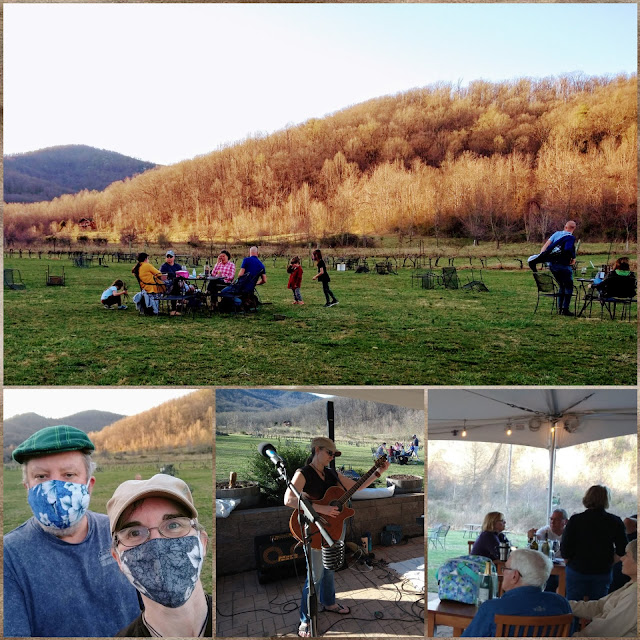 There was not a large crowd there, but there was a good number of engaged, active listeners, making it a lot of fun for us.

The food truck that was supposed to be there didn't show up. But the winery bought some pizzas to compensate, and gave us a pizza to bring home for dinner. We gratefully accepted, since after 9 pm, you're hard pressed to find any food in the area.

The next morning, I struggled to make breakfast on the gas grill out on the porch. We knew that there would not be a full kitchen: there's a dorm fridge, microwave, coffee maker, and sink, but no stove. Just the grill outside for cooking. I had actually thought about bringing our camp stove, but left it behind thinking the grill would be fine. Well. That was a lesson learned. The grill worked, but it's not designed to fry eggs and sausage in a pan. It seriously took me about an hour to cook the sausage. Oh well. We didn't starve! And by the time I finished cooking I was so wired on 4 cups of coffee, I was shaking a little!

After breakfast, we walked around exploring the farm. Graves Mountain is a sprawling property with a few motel-like buildings, a restaurant, several cabins, a camping area, orchards, various farm animals, and forest trails. We didn't even make it to the forest trails. We spent a few hours meeting all the animals and wandering around the open areas. 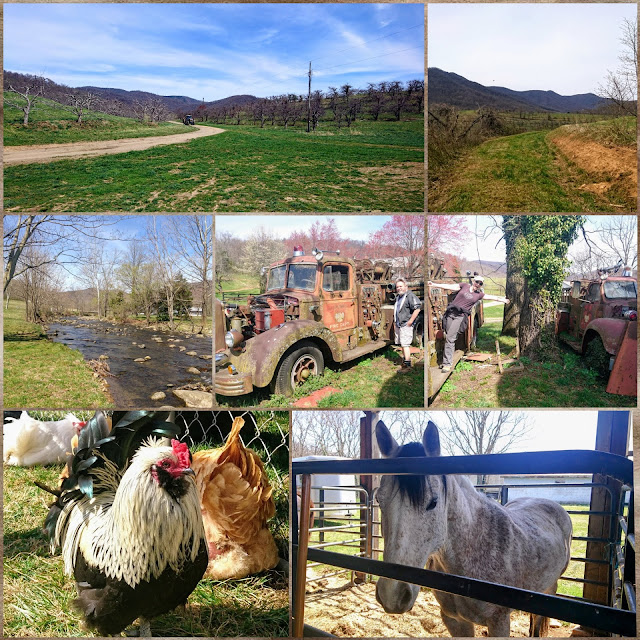 In the mid-afternoon, we headed up to Bald Top Brewery, where we shared a large flight and a couple of pizzas while enjoying the bucolic vista. The beer was very good, but the pizza was fantastically delicious. And we'd like to thank our generous tippers from the night before, because they covered all our food and drink there. 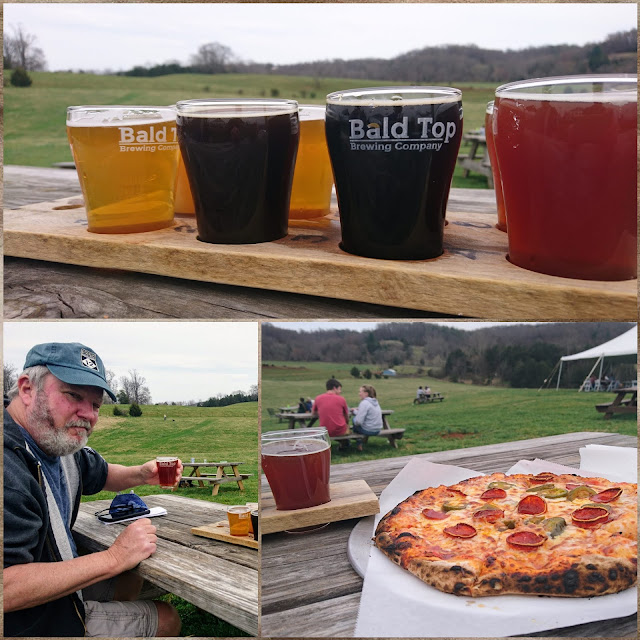 When it started to sprinkle, we finished up and drove back to the cabin. Luckily, the rain didn't amount to much, and we were able to have an excellent, long-lasting fire well into the night. We had leftover pizza for a late dinner. Yeah, we had three pizza meals in two days. Who's counting? 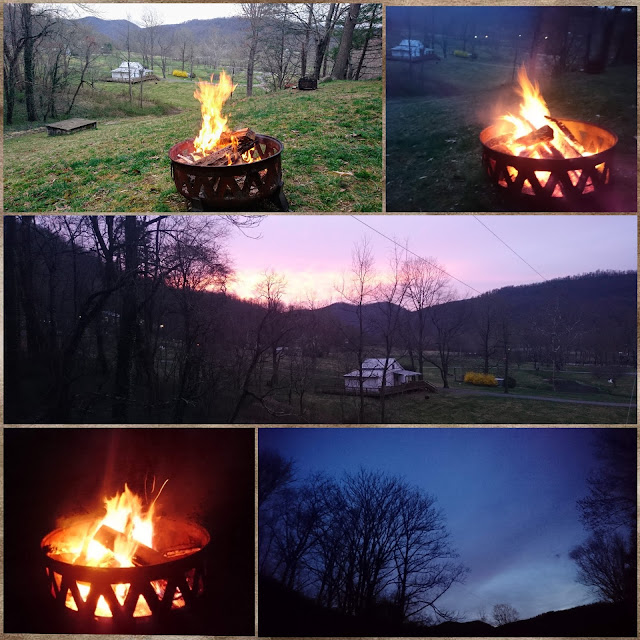 Sunday it was raining steadily. I did yoga on the covered porch, enjoying the sound of the rain and woodpeckers tapping. We had some coffee while packing up, holding off on breakfast till we could get into Madison. We had our sights on the Mad Local, where we'd gotten food a few times before, and they did not disappoint. We got breakfast sandwiches to go (because we still won't eat at restaurants inside due to the pandemic), and sat in the van overlooking the town green to eat them, while the rain streamed down. And then we headed home, taking the long way.