Hammock camping for the first time

John took his son to the Outer Banks for the weekend, to celebrate his graduation from college. It seemed like a good time for me to try out hammock camping, in which John has no interest. But I have this tiny new kitten I'm fostering, so I only wanted to go one night. I also didn't want to drive far. I tried to book a site at Pocahontas State Park (~35 min away) or Chicahominy Riverfront Park (a little under an hour), but neither had anything available. So then I booked a site at Goose Creek State Park in NC. It's 3 hours away, much farther than I'd like, but since John and I had been there before, I knew the campsite was nice and that I'd be able to swim, paddle, hike, or bike as the fancy struck me.

I didn't hit the road until after 4 on Saturday afternoon. The weather was beautiful when I left, but about a half hour from my destination the clouds rolled in, then thunder, lightning, and driving rain. This didn't bode well! I filled up at a gas station and then just parked there for a bit, eating a salad in the van while waiting for the worst of it to pass. And it did pass. By the time I got to the campground, it was clear. I set up the hammock and rain fly with no problem, after a few false starts with trees too far apart. The bug net was another matter. I had never even taken it out of the bag before, and by then it was dark. I fumbled around with it for a bit, but eventually managed to get it all straight.

I walked down to the fishing dock/kayak launch. I only intended to dip my feet in and look out over the water in the dark. But the water was soooo nice. REM's song "Night Swimming" immediately flooded my brain. I seriously considered stripping down entirely but wasn't brave enough. Instead I swam in my underwear. And it was delicious.

Back at my site, I made a simple meal of pesto pasta with tomatoes, enjoyed an illegal beverage (per NC campground rules), and went to "bed". Lying in an open hammock on a lazy afternoon is a wonderful thing. Trying to sleep in a hammock encased in a bug net on a hot summer night is... Stuffy. Awkward. Claustrophobic. Hot. I did manage to sleep, but next time I do this (there WILL be a next time) I'm just going to have the bug net ready but not pulled over the hammock. I'll douse myself in bug spray if I have to. Also, next time I won't use a regular pillow. I think one of those semi-circular travel pillows that fits around your neck would work much better.

I emerged from my cocoon a little before 8 in the morning. I was surprised it was that late, but the fly really keeps things fairly dark. Here's what my setup looked like: 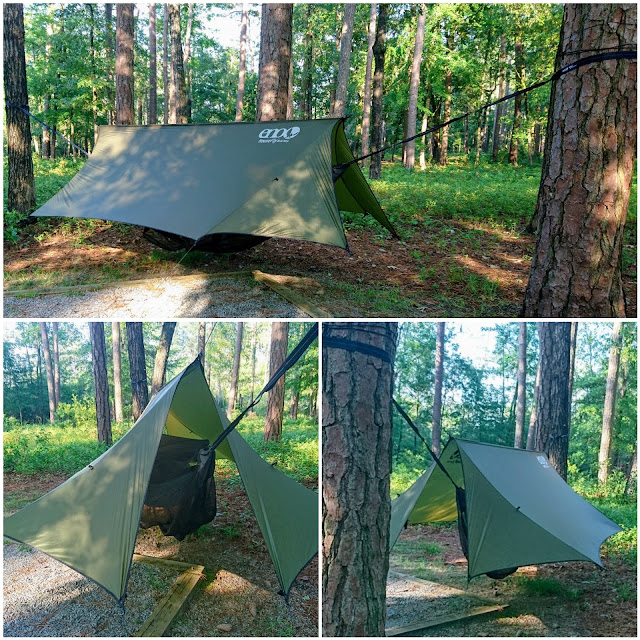 I went down to the dock again for a quick wakeup swim. This time I was prepared, wearing a swimsuit. Truth is, I wore a swimsuit to bed so I'd be ready to go first thing. Back at camp I made espresso, poured over ice and cream, and chocolate chip/ pecan/ coconut pancakes. Yum! A couple of turkey hens foraged around in the undergrowth. A red-headed woodpecker called. A pair of Acadian flycatchers made those fluttery, chattery sounds they make when they're considering a potential nest site or getting ready to mate.

I removed the bug net from the hammock, then experimented with a new, more open configuration that's still sheltered. I like it! I think this will be my standard configuration in the future unless the weather is really bad. 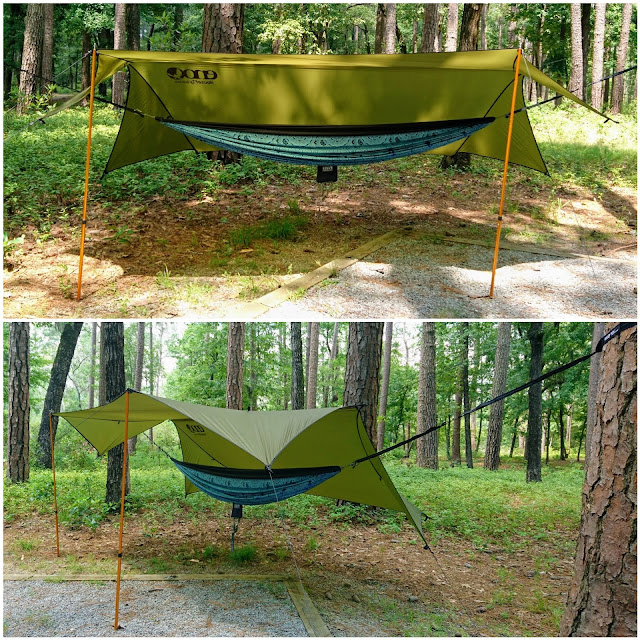 I hailed a ranger doing his rounds, and asked if I could occupy my site past the designated checkout time of 11. He said no one else was coming in that night, and I could stay as long as I liked. So I postponed breaking down camp, and back to the dock I went, this time with my yoga mat. No one was there, but two kayakers were heading toward me across the water. I felt a little self-conscious, but started my routine anyway. They beached near me and I overheard one of them saying, "That's a perfect place to do that. Nice, quiet, nobody bothering you... until a couple of buttheads show up on kayaks." I pretended not to hear, but was laughing inside.

I had brought a kayak, but wasn't feeling motivated to take it down from the van rooftop. Instead I went for a little walk on a short loop trail which was closed last time I was here. Based on the condition of the boardwalk at the beginning, I'd say it's still closed, but I went anyway. 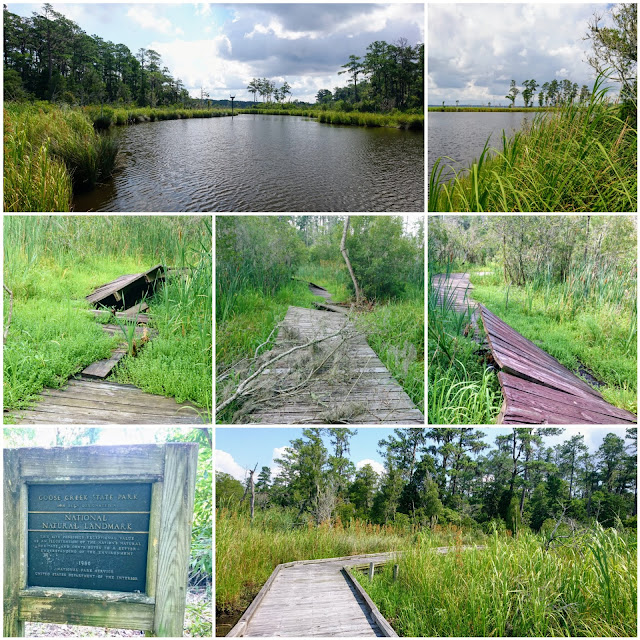 After that I tooled around the park on my bike a bit, until thunder started grumbling and I raced back to my site to take clothes off the line and put stuff away ahead of the storm. I ate my lunch before the rain set in, and when it did, it was not joking around. I took shelter under my hammock fly but had to run out to reconfigure it back to an A-frame so it would shed the rain instead of collecting it. Of course I got drenched in the process but I didn't really care. I had my dry towel waiting for me on the back of my beach chair under the fly. I also had my tablet there, and so I was able to write this blog post, which I'll upload later, while listening to the rain pounding down all around me. There's a certain joy in a torrential summer storm when you're out in the woods with just a thin little shelter, and it holds. I am joyous, right now, here in these piney woods with nothing but the sound of thunder and rain.