Neither of us had been able to see our dads in over a year and a half. So we picked a week when we could make the long drive from Virginia to Maine via New York to see them both, and planned it out. This was not a replacement for our typical northeast tour, playing shows all over the place for two weeks or more. We haven't done that since the summer of 2019. But we did have one gig on the books that fit into the plan. We were scheduled to play at Wilderness Run Vineyards, near Fredericksburg, on Sunday June 27, and we kicked off "Tour de Dads" there.

As usual, the fowl at Wilderness Run had something to say before, during, and after each song. We especially enjoyed this gobbler, who was strutting around showing off in front of the stage for hours. 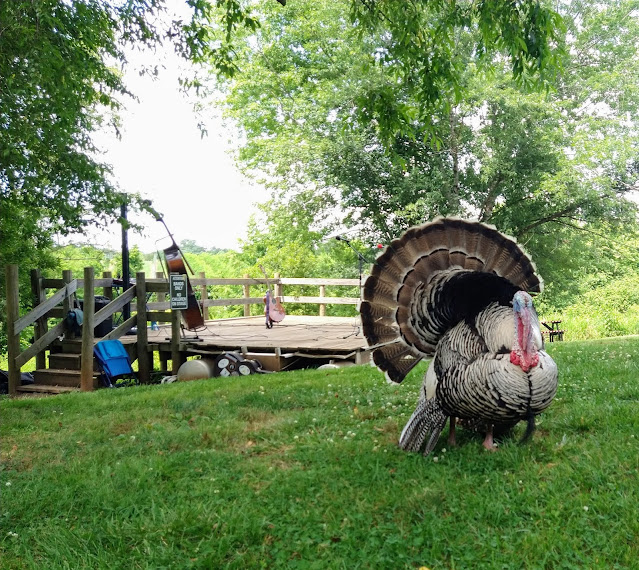 We finished playing at 5, got packed up and hit the road around 6. It was hot as balls and we really wanted a hotel with an outdoor pool, but that was not in the cards for us that night. We drove a few hours north till we got to Leesburg, which is a great little town. We stopped by an outdoor spot set up like a beach bar, featuring soft white sand and sun umbrellas, and spent a little time there listening to this guy who totally nailed that Chris Isaak tune.

We went across the street to get some brick oven pizza for dinner, then rented a room nearby at the Leesburg Colonial Inn. It sounds fancier than it is, but it was close and affordable, and that counts for a lot. We had a long drive ahead of us the next day.