Our goal was to leave New Paltz by 10 am, because we had at least 5.5 hours ahead of us to get to our next destination: Bradbury Mountain State Park, where we would be camping just north of my dad's house. I had Guinness chocolate cake for breakfast. Don't judge; I ate it with healthy plain low-fat yogurt. John had a normal eggs/bacon/hash brown breakfast made by Joe. Okay, I also had one of those delicious hash browns, rivaling any restaurant variety. I also had Joe tell me the secret of how to make them, so next time mine won't be so floppy and soggy. After packing up the van and saying our goodbyes to Kim and Joe, we went back to Woodland Pond for another visit with Jack, and then we were off.

We left the oppressive heat wave behind us; we were greeted in Maine by a drizzly chill. There was no middle ground. We prepared our camp site for the heavy rains expected that night, including stringing my new hammock fly not over my hammock, but over the picnic table. I'll say here that this was not my favorite campground. I had had high hopes for it, being so close and convenient to my dad's place. But the sites are a little small and rather close together, and there were more RV's than I'd like, some of which were running their noisy generators. But it wasn't terrible, and anyway we were only there to sleep. Once we got everything set up, we went over to Dad's house (about 15 minutes away), and from there to get dinner with him at a restaurant in Yarmouth called "Gather" that focuses on local foodsheds for provisions.

After dinner we spent a little time back at his house before returning to the campground and going straight to bed. It rained like a biatch that night. In the morning it cleared enough that I could make us some much-needed coffee, and we sat around in the drizzle sipping our cups until it was time to head back to Dad's for brunch. The brunch crew that morning consisted of us, Dad, his wife Grace, their friend Helen who was staying with them, and our cousin Sam (Dad's first cousin) who was passing through on his way back to the Vineyard. And Luke, my dad's friendly canine companion, was on the scene as well. 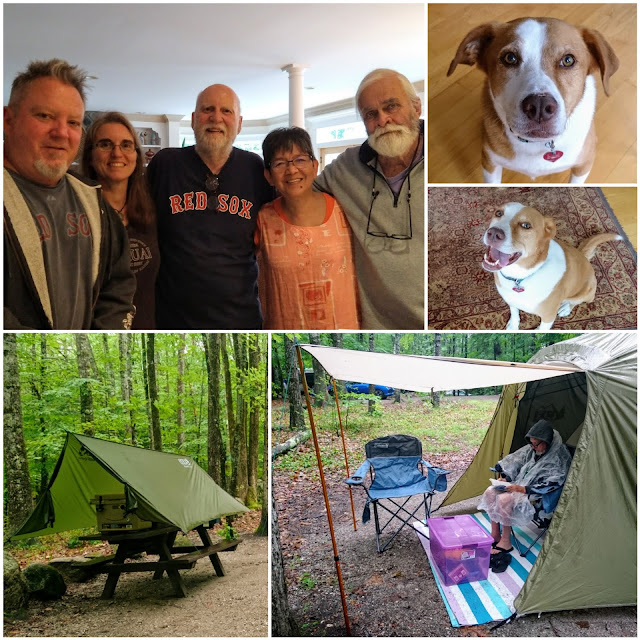 I had had all these plans for relaxing outdoor things to do with Dad while up in Maine - walks in the park, a picnic at the beach, maybe a little stroll through the Old Port. But the weather was not cooperating. The most walking we did was taking Luke down to the end of the cul-de-sac and back. But then we hit on the idea to go bowling, specifically, candle-pin bowling. We went to West-Port Bowling Lanes in Westbrook (yes, different names) which was a total throwback to the past. No flashy lights, no automated scoring. You have to push the little button after every turn to get the pins swept and set back up. John is the math teacher so he was the designated score-keeper, using (gasp!) pencil and paper. We played three rounds and had a blast! 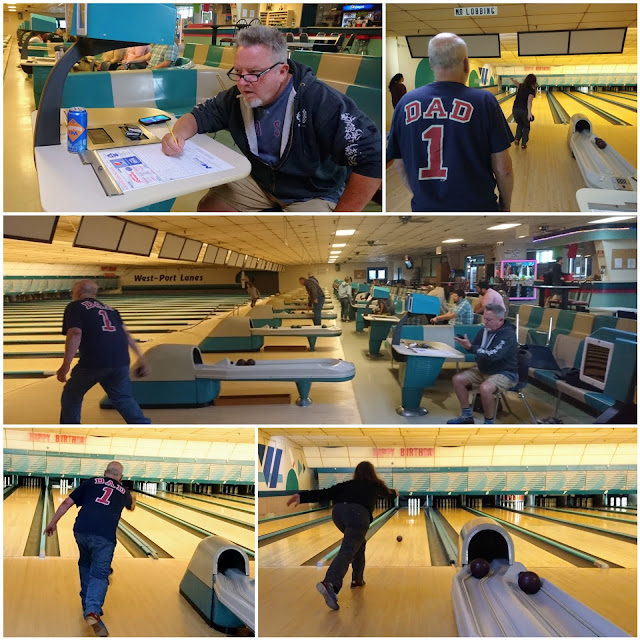 In the evening the three of us went to Boone's Fish House in Portland to get the lobster John and I were craving. He got it baked and stuffed; I got it steamed. It was noisy in there, and rather chilly, but the food was most excellent. Dad and John added to the noise by singing some song I don't know.