Wisteria to the Camel

Spring has flown by, and somehow it’s summer already. The older I get, the faster time seems to pass, which seems patently unfair. I want things to slow down! But anyway, this past weekend we got to chill out at a little cabin sort of in the middle of nowhere, in Fort Valley, VA. It’s about 45 minutes away from Wisteria Farm and Vineyard, where we had a gig on Saturday.

John showed up at my house Friday afternoon in the torrential rain, and we waited a little to pack my stuff into the van, hoping the downpour would abate somewhat. It did, a little. But right about the time we finished loading up, a severe weather alert started blaring from our phones, warning of flash flooding and telling people not to travel unless they were under an emergency evacuation order to get out of a flood zone. Yikes. We debated a little but then decided to leave anyway. By that time there was very little rain coming down and the roads did not seem bad. The rain never picked up too much on our way here, but there were some harrowing moments on winding roads through thick fog.

We got to our cabin around 7:30, settled in, and made homemade pizza for dinner, which we ate out on the covered patio, despite the chill in the air from all the rain. The frog chorus coming from down the hill was intense! On Saturday we were happy to simply relax at the cabin until it was time to leave for Wisteria. Sometimes you don’t want to go running around trying to pack in as much activity as possible. Sometimes the best thing in the world is to sit quietly, feel the breeze on your face, listen to the birds, sip your coffee, and read a book or write. 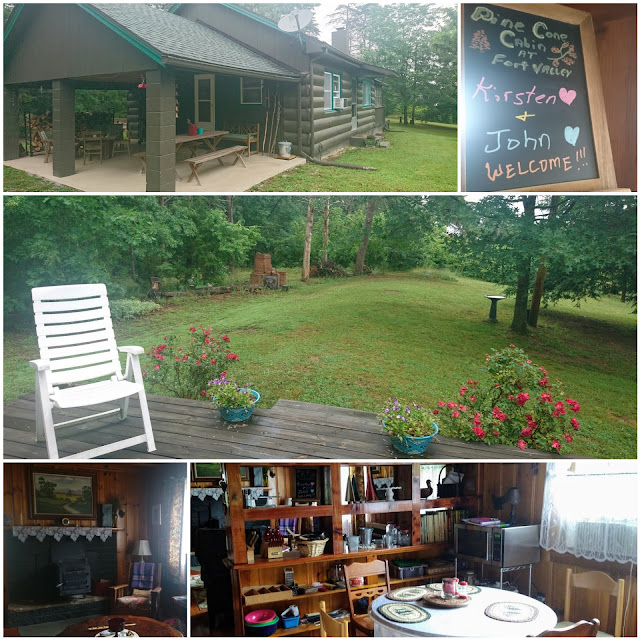 Our gig at Wisteria was a real pleasure. The weather was in our favor, and a good number of people showed up and actively listened. They even persuaded us to play an encore at the end. In the past when we’ve played there, there were always several chickens wandering around, but this time I only saw one strut by behind us while we were playing. I asked Moosa about it, and he told me they had had to fortify the chicken enclosure to keep them safe from foxes and coyotes. The new high fence successfully contains all the chickens except for one extra spunky hen who is able to fly over it. I asked if she had a name, and Moosa said she did not, and asked if I wanted to name her. So I named her Moira. I hope it sticks! 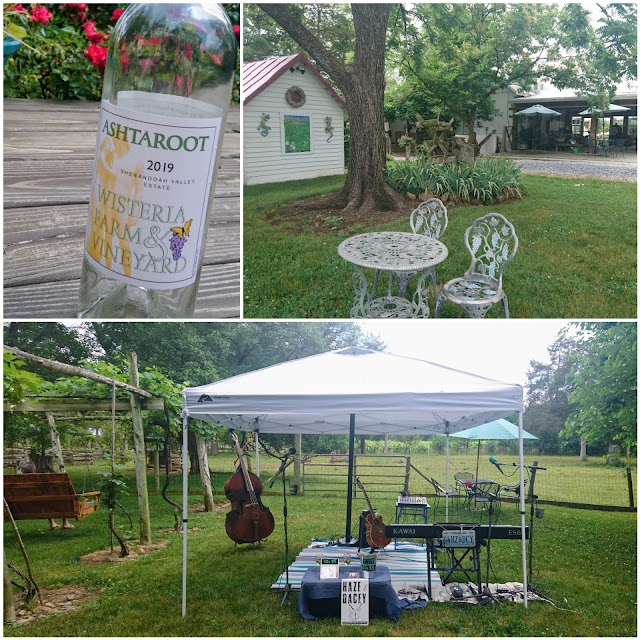 After leaving Wisteria, we stopped at the Hawksbill Greenway in Luray to go for an easy walk. The water in the stream was inviting, so we stepped in for a bit. Fish were jumping here and there, and we even saw a great blue heron catch one! I also saw a water snake swim by at one point. Then we headed back to the cabin, navigating numerous hairpin turns, enjoying fabulous views, and gazing longingly at a huge, gorgeous, 3-level cabin built into the mountain that we wish we could buy for ourselves. 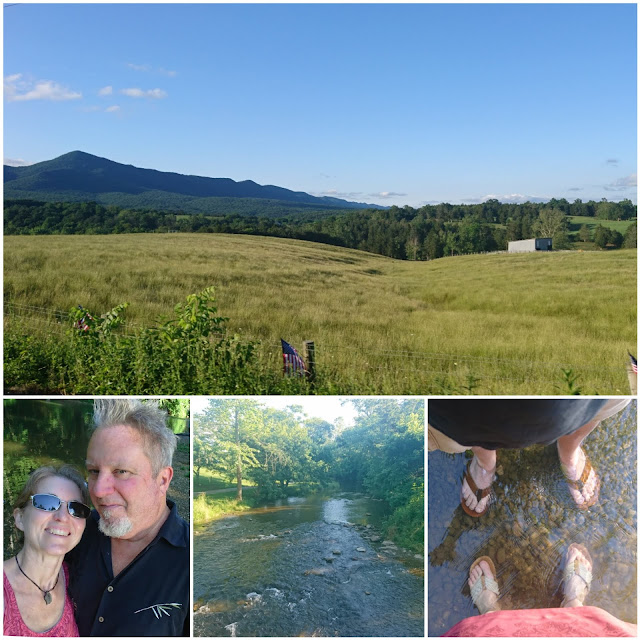 That evening was lovely. The sky had mostly cleared, and there were loads of stars. We grilled a steak dinner and afterwards drank the bottle of wine we’d received at Wisteria.

On Sunday after checking out of the cabin, we hit the Massanutten Trail, since there was a trailhead just 15 minutes away. We hiked in about 1.8 miles before turning around. A storm was blowing in. We hiked back about twice as fast as we’d hiked in, but got caught out anyway. Despite John’s poncho and my jacket, we were thoroughly drenched by the time we got back to the van. A tree branch fell and hit the van just as we arrived. We were lucky we weren’t standing right under it! 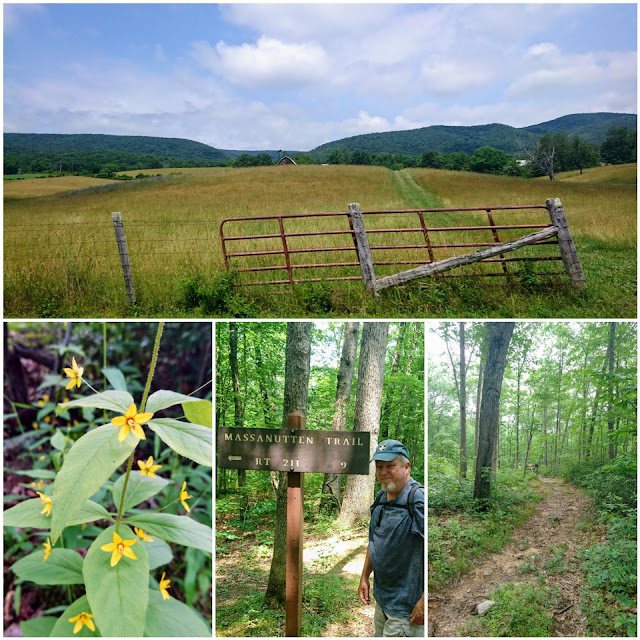 We ate lunch in the van while the rain continued to pour down, then hit the road toward home. We stopped in Gordonsville to have a drink at a new place, the Champion Ice House, whose slogan proclaims: “Cold beer! Hot chicken! Good friends!” The beer was indeed very cold. We didn’t try the chicken, and didn’t make any new friends. We stopped again in Montpelier to look over the home that John recently put on the market, and see what needs to be done there.

By the time we got back to my house, it was 7:30. We unpacked a bunch of stuff, and I changed my clothes, and then we went out to The Camel to hear Rob Williams’ band play in celebration of his latest record. He had not been able to give his album a proper release party last year due to the pandemic. It was so great to see live music indoors again, and to hang out with some friends, get a beer at the bar, and not wear a mask. We had not reserved a table, but we got to sit with John Morand, who produced Rob’s album as well as ours, and Chris and Jolie joined us too. A fabulous end to a fabulous weekend. 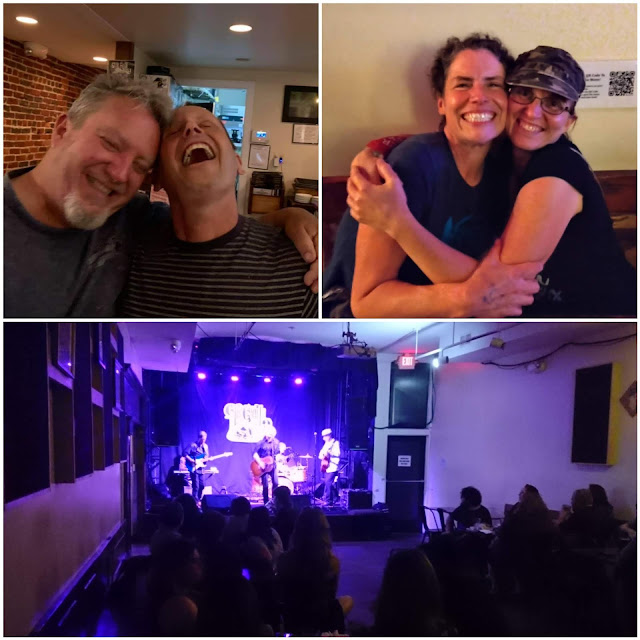