My Name is June

It took me awhile to get around to watching the MGM/Hulu adaptation of "The Handmaid's Tale". I had read the book by Margaret Atwood many years ago, and it had a powerful impact on me. I didn't want to watch the series because (a) I'm cheap and didn't want to have to buy it and (b) I didn't want it to ruin the book for me. But after reading so many positive reviews, I decided to give it a try. I sat down one night last January, pulled it up in my Amazon account, paid the $25 or whatever it was to buy season 1, and started watching. And I was immediately hooked.

The series is amazing. Respectful to the original story, but fleshing out the characters and their side stories in a truly compelling way. I binge-watched seasons 1 and 2 over about a week or two, I think. The song "My Name is June" poured out of me one night. It is the first in my "Letters from Gilead" series. Here is one of the very earliest recordings I made:

I am a mother and a daughter, a lover and a friend
The world that I once knew is gone, impossible to comprehend
Once I had a gentle man and he loved me to the moon
They call me by another name
But still, my name is June.

Now I keep my head down, I don't look them in the eye
Every dress I own is red and the driver is a spy
Once I had a mother, a fighter through and through
They call me by another name
But the name she gave to me is June. It's June.
All I have left is my name.

You asked me if I'm happy. I told you what they made me say.
The truth is: Death is preferable to what I'm living through today
Once I had a little girl that I carried in my womb
They call me by another name
But now you know my name is June. It's June.
And all I have left is my name.

...a mother and a daughter, a lover and a friend
The world I knew is upside down, impossible to comprehend
My daughter is out there somewhere and I pray to see her soon
She's the only reason I stay alive.

My name is June.
And all I have left is my name.

If you haven't finished the book and/or the series, you may want to wait to read contents below.

"My name isn't Offred, I have another name, which nobody uses now because it's forbidden. I tell myself it doesn't matter, your name is like your telephone number, useful only to others; but what I tell myself is wrong, it does matter. I keep the knowledge of this name like something hidden, some treasure I'll come back to dig up, one day... I lie in my single bed at night, with my eyes closed, and the name floats there behind my eyes, not quite within reach, shining in the dark."

- Excerpt from "The Handmaid's Tale" by Margaret Atwood

In the novel, the reader never finds out what the protagonist's original name was. In 2017, Margaret Atwood wrote a new introduction to her book. In it, she said, "Some have deduced that Offred's real name is June, since, of all the names whispered among the Handmaids in the gymnasium/dormitory, June is the only one that never appears again. That was not my original thought, but it fits, so readers are welcome to it if they wish."

In the MGM/Hulu adaptation of the novel, June declares her name at the end of the very first episode. Speaking only to herself, in her head, in her room, she says, "Here, someone is always watching. Nothing can change. It all has to look the same. Because I intend to survive for her. Her name is Hannah. My husband was Luke. My name... is June." 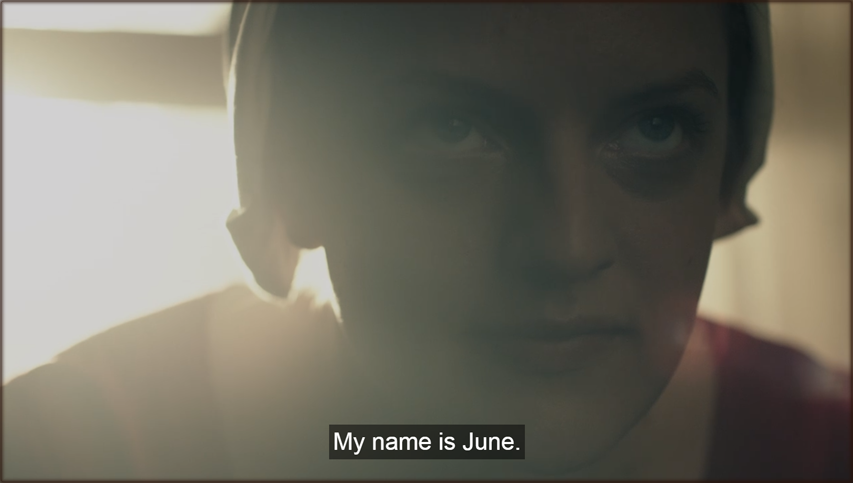 And then there's a gut-punch of a scene in the beginning of season 2, episode 4. Aunt Lydia calls her by her Gilead name, Offred, but June, although chained to a bed and powerless, isn't having it. "It's June," she declares defiantly. "You know my fucking name."

They've taken absolutely everything from her: husband, child, independence, dignity. All she has left is her name. And actually, they've taken that too. But by declaring it, whether out loud to Aunt Lydia or silently to herself, she holds on to her identity, proving herself to be a survivor who will never be completely defeated.

Additional inspiration for this song comes from season 1, episode 6. There's a scene in which the Mexican Ambassador, a woman, asks June if she's happy. But in the presence of the Commander, she can't tell the truth. Later, the Ambassador catches her alone, and June tells her about the many horrors she has endured. Although visibly shaken and saddened by June's story, the Ambassador says she can't help her. It is clear that she will proceed with her plan to trade Mexican chocolate for Gileadean handmaids.

My song is a reimagining of what June might have said to the Ambassador.